INTRODUCTION
The exact origin and relationship between various Celtic tribes is still uncertain and controversial. The earliest undisputed example of a Celtic language are the Lepontic inscriptions (beginning 6th century BC). Celtic tribes settled in large parts of Western continental Europe, the Iberian Peninsula, Ireland and Britain.
We are focussing on coins and artefacts from British and Continental (Gaul and Rhineland) tribes. Here you can find a short summary with some examples of coins or artefacts we have sold in the past, or that are currently available on our website. A more comprehensive list of Celtic tribes can be found on Wikipedia 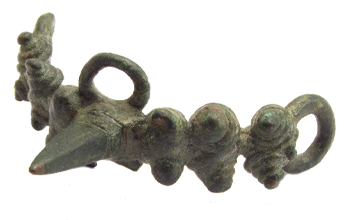 Example of a Celtic bronze prick spur
BRITISH TRIBES
Durotriges
The Durotriges tribe occupied Dorset, south Wiltshire, south Somerset. They lived in a mineral-rich area and minted coins well before the Roman invasion. One of the first Celtic mints in Britain was located at Hengistbury Head. Other metalworking also involved gold, silver and copper alloys as well as the casting of bronze artefacts and ironworking with local iron ore. Many coins from this era have been found, interestingly some of which appear to be forgeries with a bronze base given a dip coating of silver.
Hengistbury Head was also a main trading port for importing wine, tools and pottery from Gaul and even Italy.
The territories of the Durotriges were possessed of an unusual density of powerful hillforts. They occupied some of the most famous hillforts of Maiden Castle, Hod Hill and South Cadbury Castle. They were bordered to the north and east by the Belgae and by the Dumnonii to the west. During the time of the Roman invasion the Durotriges were one of the two tribes that fought against Vespasian and the second legion. 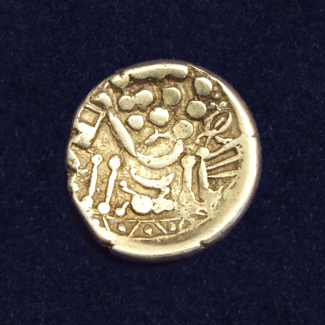 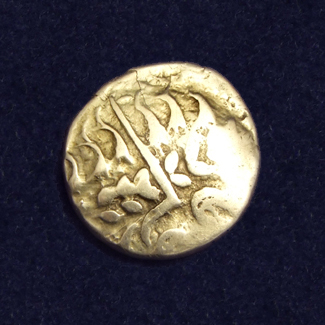 Example of a gold stater from the Durotriges tribe, Chute type
Iceni
The Iceni or Eceni was a Celtic tribe who inhabited an area of Britain (roughly to the modern-day county of Norfolk) between the 1st century BC and the 1st century AD.
The Iceni began producing coins circa 10 BC. Their coins were a distinctive adaptation of the Gallo-Belgic "face/horse" design, and in some early issues the horse was replaced with a boar. Some coins are inscribed ECENI, making them the only coin-producing group to use their tribal name on coins.
Tacitus records that the Iceni were not conquered in the Claudian invasion of AD 43, but they made a voluntary alliance with the Romans. After the death of Prasutagus, a pro-Roman Icenican king, the most famous revolt against the Romans was led by his widow Boudicca (Boadicea) in AD 61. After initial successes agains the Roman Ninth Legion, and the destruction of Colchester, London and Verulamium, Boudicca was finally defeated by the Roman army, led by Paulinus. 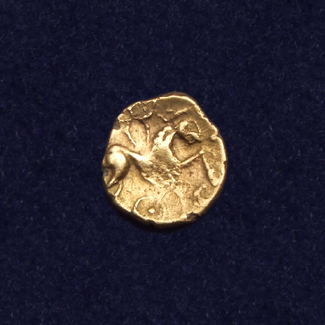 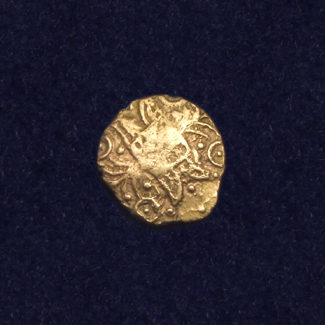 Example of a gold ¼ stater from the Iceni tribe
Trinovantes
Addedomarus, ruler of the Trinovantes in the late 1st century BC with territories on the north side of the Thames estuary. The Trinovantes were bordered to the north by the Iceni, and to the west by the Catuvellauni.
His name is known only from his inscribed coins. He was the first king to produce inscribed coins north of the Thames, perhaps as early as 35 BC, although some estimates are as late as 15 BC. He seems to have moved the Trinovantian capital from Braughing in Hertfordshire to Camulodunum. For a brief period (ca. 15-10 BC) Tasciovanus of the Catuvellauni issued coins from Camulodunum. Addedomarus then appears to have regained power and reigned until 10-5 BC, when he was succeeded by Dubnovellaunus. 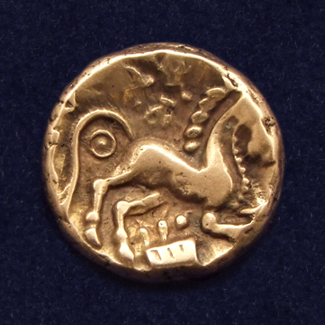 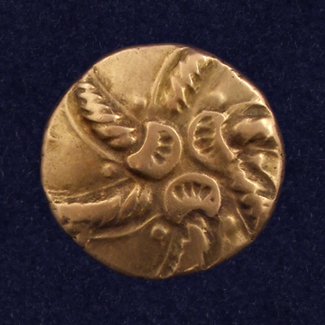 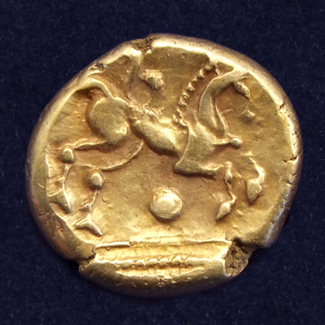 Trinovantes tribe, Gold stater, Whaddon Chase type
CONTINENTAL TRIBES
Ambiani
The Ambiani were a sea-faring tribe, living along the lower reaches of the Somme (present day the Picardy region). Their tribal capital was called Samarobriva (corresponds to the modern city of Amiens). The Ambiani were consummate minters and Ambianic coinage is found throughout the territories of the Belgic tribes (including the Belgae of Britain).
In 57 BC the Ambiani joined the coalition of Belgic tribes to fight against the Romans, led by Julius Caesar. There is some evidence from a coin that bears a stag on one side and a betorced head on the obverse that the Ambiani were followers of the god Cernunnos (horned god). A well-known type of gold staters from the Ambiani are known as "Gallic War staters". They were issued to fund the fight against Julius Caesar in Gaul. The fact that the coins have no obverse design is an indication that these coins were struck in a hurry. 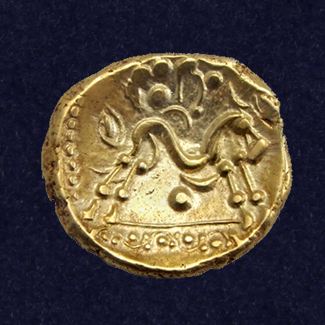 Example of uniface gold Ambiani stater
Lingones
The Lingones were a Celtic tribe with their vast territories straddling the current department of Haute-Marne and parts of the Côte d'Or, de l'Yonne et de l'Aube. The surrounding tribes included the Senones, Leuci, Remi, Suessiones and Aedui. It was one of the largest civitas of Gaul, with their capital called Andematunnum (Lingones), currently the city of Langres in the Haute-Marne. Around 400 BC some of the Lingones migrated across the Alps where they settled in Cisalpine Gaul (northern Italy). Together with the Boii and Senones tribes, these Lingones may have been part of the sacking of Rome in 390 BC.
By the first century AD the Gaulish Lingones were thoroughly Romanized and were also minting coins. Their advantageous position at the trade route between the Mediterranean with the far west and north made this an economic vital area with great influence in ancient Gaul, and made them Rome's natural allies. It was with their support that Julius Caesar was able to conquer the northern part of Gaul (Belgica). Together with the Aeduans and Remi, the Lingones were considered to be Caesar's most loyal supporters, offering assistance with putting down the insurrection of Ambiorix and the siege of Alesia.
After the accession of Galba as ruler of the Roman world the Lingones sided with the rebellious legions in the Batavian rebellion (69-70 AD), declaring the independence of Gaul with the Trevirans.
Between the second and first century BC the Lingones took a Roman denarius of P. Cornelius Sulla (151 BC) or of the dictator Sulla (89 BC) as a model for minting a series of silver coins. Because of a Greek inscription on the reverse, these have become known as Kaletedou-type. The significance of the Greek inscriptions has not been explained. On the obverse is a helmeted head of Roma, the Greek inscription on the reverse is classed in 3 types:
- Type 1: legend SVLA KAΛΕΤΕΔΟV
- Type 2: legend KAΛΕΤΕΔΟY
- Type 3: legend abbreviated, sometimes as ΚΑΛ or as the remainder of a pseudo inscription in conjunction with a many-spoked wheel, a circle point decoration, a delta (upside down). 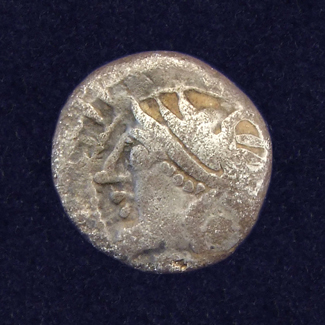 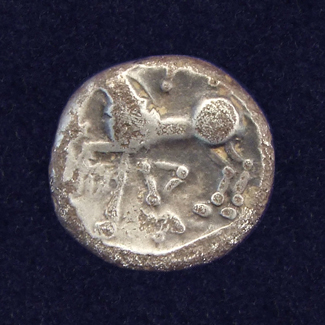 Example of  a silver quinarius of the  Lingones tribe
Morini tribe
The Morini were a Belgic tribe who inhabited the low-lying plains and coastal wetlands of the North Sea in the historic Flanders region (the province of West Flanders) and the present-day Nord and Pas-de-Calais(France). The word "Flanders" is a contraction of "flooded lands" and refers the north of the Morini territory.
Caesar was very interested in a part of the Morini territory, the present-day region of Calais because here was the  shortest crossing of the sea between Gaul and Britannia. The territory of the Morini and Menapii was well protected by marshes and woodland and suited for guerilla tactics. During the great Gallic rebellion led by Vercingetorix, the Morini sent a contingent of some 5000-7000 men to the relief force which had to liberate Alesia. 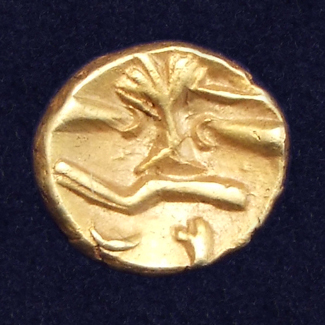 Northern Gaul, Morini tribe, gold ¼ stater, uniface
Remi tribe
The Remi were a Belgic tribe of north-eastern Gaul in the 1st century BC. They occupied the northern Champagne plain, between the rivers Mosa (Meuse) and Matrona (Marne), and along the river valleys of the Aisne and its tributaries the Aire and the Vesle. Their tribal capital was at Durocortum (Reims, France) and they were renowned for their horses and cavalry.
The Remi, under Iccius and Andecombogius, allied themselves with Julius Caesar when he led the conquest of Gaul. The Remi tribe remained loyal to him throughout the entire Gallic Wars, the most pro-Roman of all the peoples of Gaul. The Celts were defeated at Telamon, which was the end of Celtic power in Italy.

3 Examples of electrum ¼ staters of the Remi tribe.
For more examples and details, check on our website: Northern Gaul, Remi tribe
Senones
The Senones tribe were a nomadic tribe, related by blood to many other Celtic tribes (Lingones, Aedui, Sequani, Ambarri, Aulerci, Carnuti and Turoni). By the 8th century BC, the Senones were settled around the Loire, Seine (Sena) and Yonne river. By the 4th century BC the Senones and Lingones also settled around the Garonne river. Many male and female warriors followed the Boii and Lingones over the Alps. They destroyed the Etruscan town of Meltum (Melzo), founded Milan and settled along the Adriatic coast (Sena Gallica, now Senigallia). In 232 BC the decision of Rome to evict the Senones led to the Gallic invasion over the Alps in 225 BC. They contributed warriors to the Celtic army during the siege of Alesia.

Senones, AV stater, Gallo-Belgic bullet type
Sequani
The Sequani were a Gallic people who occupied the upper river basin of the Arar (Saône), the valley of the Doubs and the Jura Mountains, their territory corresponding to Franche-Comté and part of Burgundy.
Some of the Celtic tribes that maintained close relations with Rome issued equivalent coins to facilitate trade. The Sequani asked for Caesar's help against Ariovistus but later they joined Vercingetorix' party against Caeser at Alesia. Together with the Senones, they contributed around 12.000 warriors to attack the rear of Caesar's forces at the siege of Alesia. 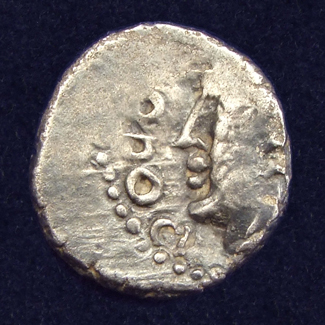 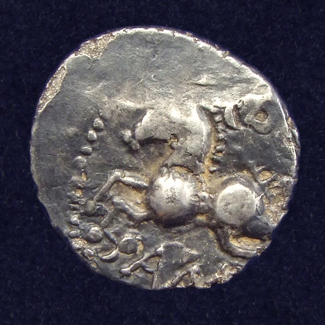 Your basket is empty

Into shopping cart Order
Welcome! This website uses cookies.
Nice that you visit our site. Please indicate here which cookies we may place. The necessary cookies do not collect personal data. The other cookies help us to improve the site and your visitor experience. They also help us to inform you about our products. Are you going for an optimally working website including all the benefits? Then tick all the boxes!